And I remember the golden
ringlets of her hair that mimic
the curls of the sea.
It should have swallowed me –her hair
or the sea-water—, and I would have had
my fill of life or death, whichever men know.

And I remember her red lips,
the color of a thousand dead
horses soaking the strand.

I should have stained myself red,
and so lost the graces of her eyes.

And I remember the curves of this woman
which rivaled the swirling eddies
of oars as they crossed the water
in a war march.

If only their strokes had cut me
like the teeth of mermaids
or the stares of my brothers. 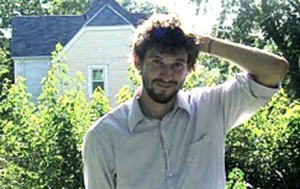 Brian Clifton lives in Kansas City with his girlfriend, Amanda, his dog, Doc Holliday, and his pig, H1N1 (pronounced hinnie). A recent graduate of Creighton University (B.A. in English and Greek), he has an inordinate fondness for three things: beards, cardigans, and language. Currently, he is indulging in all three. His poems can be found in Plains Song Review, Iodine, The Dirty Napkin, Third Wednesday, The Journal, Poetica, and others. He has a few manuscripts that are almost ready to be told they aren’t publishable and that they need to be edited.