Karen Osborn is an award-winning novelist and writer of short stories. Booklist regards her writing as “…lyrical, focused, enchanting,” and Jodi Picoult admires how, “With grace and poetry, Osborn explores how the biggest emotions are sometimes found in the smallest seconds…” It’s true:

“There was a small light over the phone booth, but other than that, the street was dark. I couldn’t figure out where the river was. David was swimming toward the shore. I was thinking how he was there now, how I would go to him and put my body with his body, the body of the river, how I would make love to the river. And then I looked at the car where Michael was bent over the dash, and it cut through me like the acid was gone, exploding as if there were this second again where I could keep him back. David had jumped off the bridge.”

–The River Road by Karen Osborn

How does she write like this, with lyricism and concision in a dramatic emotional moment?

Karen Osborn is a poet—she received her MFA in Poetry from the University of Arkansas. She didn’t intend to: Osborn entered the program as a dual Poetry/Fiction writer. But because of the lyrical nature of her writing voice and possibly because she was one of just several women in the program, she was steered toward poetry. Osborn loves both genres, and took as many fiction classes as she could along with her coursework in poetry. When she finished her program, she said “…the first thing I’m going to do is write a novel.” But she did more than that. She carried the tools she had acquired as a poet over to her prose writing, resulting in a singular lyrical, poetic voice in prose. 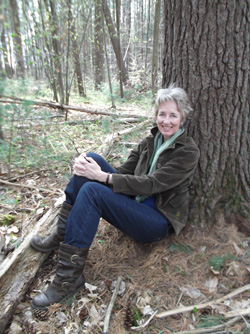 I asked Osborn what lessons prose writers could learn from poetry, and she identified four different poetic techniques, sound, imagery, compression and endings, that could be translated to prose to great effect.

The “basis of language is sound,” Osborn says. “Sound carries often the emotion,” and you “can’t break that apart from meaning—that is meaning.” It’s been this way from the beginning. In the “development of literature historically, poetry came first by its form.” Stories were passed on orally, through song,  and it’s that rhythm and rhyme and repetition that lent to stories being remembered. This is where prose comes from, from song and the poetry of early literature, such as Homer’s The Iliad and The Odyssey. But rhythm applies to prose too, on the level of the sentence and its syntax. How sentences work is “important in fiction. It’s the base unit of all our writing,” and playing with sound and rhythm “can only make your language stronger as a writer today if you return to these roots.”

Reading poetry “…makes you read word by word…makes you slow down” to appreciate each word choice and its rhythm. Osborn recommends not only reading poetry but memorizing it to assimilate its sound and rhythm. “Poetry lends itself to memory,” Osborn says, and when you memorize a poem, “you own it in a way that’s different than if you read it.” Another suggestion to further study syntax is to read Ellen Bryant Voigt’s The Art of Syntax: Rhythm of Thought, Rhythm of Song, which explores how specific poets compose the order of their words to evoke meaning and musicality.

Poets render powerful imagery with a well-chosen word or phrase; prose writers rely heavily on imagery as well. For Osborn, it’s the foundation of her writing. Whether the imagery is suggestive or figurative, it can be used to “suggest a bigger reality.” A simple image can be more evocative and impactful that a scene or an action can be, or it can make “an action resonate in a different way.” Exploring how poets use imagery can only deepen our own use of it in prose.

In poetry, “every word’s got to count,” Osborn says. When you have too many extra words in a line, she explains, “they have no weight,” and “language works best when compressed.” Poetry, with its brevity and concision at the level of the word, is an excellent tool for studying how language can be compressed, making it more powerful and clear. As prose writers in the long form, we have more room for words, but that does not mean we have the luxury of adding unnecessary words. Our prose, like poetry, carries more weight when each word is carefully chosen to evoke an emotion, paint an image, or reflect a character.

Particularly in short stories, there is much to learn from regarding endings. The narrative technique in both poetry and short stories works similarly. There is a resonance between the beginning and the ending of a poem, with a “leaning backwards to the beginning of the story for the…ending,” Osborn says. When done well, this resonance can be powerful in prose as well. Osborn’s novel The River Road begins and ends with the river, with the consequences and ramifications of a single moment in time. There’s a feeling of coming full circle, for both the reader and the protagonist, and yet the protagonist will continue to relive that moment again and again. She will never be free of the river and what happened there. It’s this hearkening back to the beginning that creates the resonance.

Prose writers can study fellow prose writers for techniques such as shaping a scene, structuring a plot, and developing a character, but it’s to poetry we can turn to study the sound and rhythm of word choice and syntax, the rendering of imagery, the compression of language, and the resonance of endings with beginnings.

Karen Osborn is a member of the faculty at Fairfield University’s MFA Program in Creative Writing. She’s the author of four novels and numerous short stories and poems. Visit her website here.